The low solubility of Fe(III) in water limits the concentration of bioavailable iron to levels far below that required for growth.  The problem of iron availability is further compounded for many pathogenic bacteria and marine bacteria because iron in their growth environments is naturally low.  Over vast regions of the open ocean, the concentration of iron is only 0.01 – 2 nM. For pathogenic bacteria invading a host, free iron is not available because it sequestered by the host proteins ferritin, transferrin, and lactoferrin at the onset of an infection.

Bacteria have evolved parallel pathways to obtain iron from different sources, including Fe-heme, Fe-transferrin, ferrous ion, as well as Fe(III)-siderophores, when starved for iron (Image Gallery Figure 1).  Siderophores [Greek for iron (sideros) loving (phore)] are high affinity chelators for Fe(III). Over 500 siderophores are known. Many newly discovered siderophores are amphiphilic, composed of a hydrophilic iron-binding head group and a lipophilic fatty acid tail.  Interestingly, this type of siderophore has primarily been isolated from certain pathogens and from a wide variety of marine bacteria.  We are interested in:

1. Siderophore biosynthesis: We are using a genome mining approach to identify new siderophores and characterize the biosynthetic pathways that produce siderophores. Recently, in one example, we predicted, identified and characterized a new suite of amphi-enterobactins from Vibrio harveyi (See Image Gallery Figure 2).  The condensation domain of the non-ribosomal peptide synthetase (NRPS) enzyme AebF is unique in that it catalyzes two distinct condensation reactions (See our JACS 2014 publication). We are continuing to investigate the relationship between amphi-enterobactin biosynthesis and quorum sensing, further enzymatic processing of amphi-enterobactin in the iron uptake process, as well as the biosynthesis of other acyl-peptidic siderophores.

2. Enzymatic modification of siderophores: Many marine and pathogenic bacteria produce amphiphilic acyl-siderophores. We have identified Ntn-hydrolase enzymes which release the fatty acid from these siderophores at certain growth phases of the bacterium (See Image Gallery Figure 3 and our Biochemistry 2014 publication).  Current investigations are directed towards elucidating the role of this enzyme in bacterial iron uptake, growth and quorum-regulated communication.

Esterases are also important in tailoring siderophores. While the amphi-enterobactin siderophores are very hydrophobic and associate with the cell membrane, a hydrophilic non-acylated dimer of L-Ser-2,3-dihydroxybenzoic acid is released into the growth supernatant of V. harveyi.  The biosynthetic machinery for the dimer is not seen in the bacterial genome. We are investigating potential enzymes responsible for Ser-ester hydrolysis of amphi-enterobactin and how this process facilitates iron uptake.

3. Photoreactive siderophores: We discovered that ferric complexes of siderophores containing an alpha-hydroxy carboxylic acid group, such as in aerobactin and the aquachelins, among many others, undergo a UV photo-induced oxidation of the siderophore and reduction of Fe(III). Fe(III)-aerobactin photolysis results in quantitative decarboxylation of the central citrate moiety and formation of Fe(II) (Image Gallery Figure 4).  Photochemical cycling of these siderophores in the surface oceans could enhance the bioavailability of iron. Iron(II) produced by the photolysis of Fe(III)-siderophores could be taken up directly by bacteria or other organisms. The oxidized siderophore photoproduct still binds iron(III) with high affinity, and can also contribute to iron uptake.

My research interests are in bioinorganic chemistry and metallobiochemistry with an emphasis on elucidating roles of metal ions in catalysis by metalloenzymes, as well as processes by which microbes acquire metal ions they need to grow. We are currently focusing on the biosynthesis of siderophores in regards to microbial iron acquisition, with a focus on chirality in biosynthesis and chirality of the Fe(III)-siderophores; the role of haloperoxidases in disruption of microbial quorum sensing, as well as in cryptic halogenation reactions; the design of catechol compounds for wet adhesion; and the role of microbial peroxidases in lignin disassembly.

My research is on the structural elucidation of novel siderophores found through genome mining, and the investigation of unique chemical processes carried out by siderophores either in their apo form or when bound to various metals.

Robert is an organic chemist in a bioinorganic laboratory. His research has focused on structure elucidation of siderophores and on the synthesis of siderophore analogues as small molecule models to further understand mussel foot protein adhesion on wet surfaces. He also enjoys talking in the third person apparently.

I’m interested in understanding how mussel foot proteins adhere to surfaces underwater and how to apply what we learn to synthetic adhesives.  I synthesize small molecule models of mussel foot proteins to understand the role of lysine in adhesion.  Additionally, I’m tracking oxidation kinetics of modified catechol in an effort to promote adhesion at physiologically relevant conditions.

I am currently working on siderophore production by shallow marine hydrothermal heterotrophic and elemental sulfur-reducing bacteria under aerobic and anaerobic conditions.

I have worked as an undergraduate researcher in Dr. Butler’s lab for two full years and am currently attending my final year to earn a B.S. in biochemistry through the chemistry department at UCSB. My projects have included synthesizing derivatives of siderophores for wet adhesion purposes and conducting genomic studies to determine the genes responsible for siderophore production in bacteria. I hope to continue research after graduating and plan to attend graduate school after enjoying a year off of hiking and traveling. 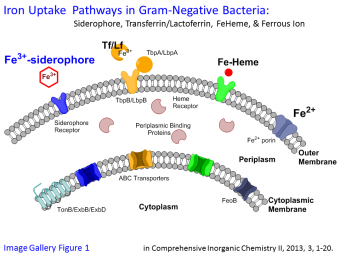 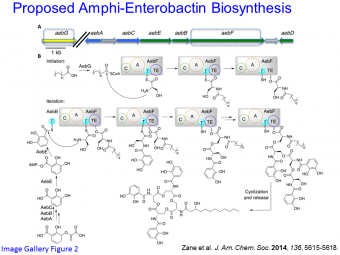 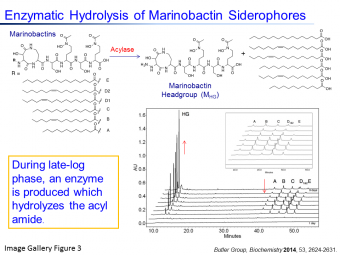 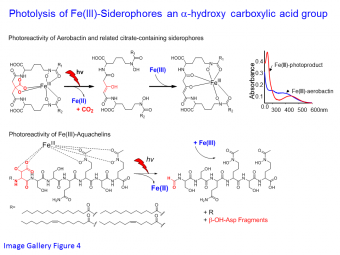 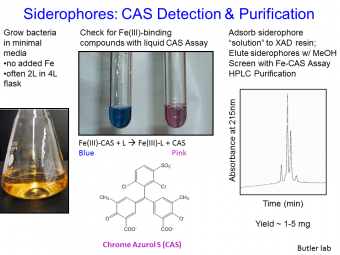