Vanadium haloperoxidases (V-HPO) catalyze the peroxidative halogenation of organic substrates using H2O2 to oxidize the halide (Cl¯, Br¯, or I¯).  V-HPOs are especially abundant in algae and some microbes and contribute to the biosynthesis of many marine natural products. The enzyme active site contains vanadate ligated by a single His residue and stabilized by significant H-bonding to vanadate oxygen atoms.  During turnover (Image Gallery Figure 1), hydrogen peroxide coordinates to V(V), which in turn oxidizes the halide by 2 electrons and results in electrophilic halogenation. I the absence of an appropriate organic substrate, singlet O2 , quantitatively which does not destroy the protein active site.  Radical halogenation products are not observed.

Biosynthesis.  We are interested in the activity of vanadium halperoxidases in the biosynthesis of halogenated marine natural products (Image Gallery Figure 2).  We have demonstrated V-BrPO carries out bromonium ion induced cyclization of certain terpene substrates, forming cyclic bromoterpene natural products (for example, snyderols from marine red algae) with the correct diastereoselectivity.

Quorum Sensing Disruption.  We are investigating the role of vanadium haloperoxidases in disrupting bacterial quorum sensing, the biological feedback mechanism by which microbes can sense a sufficient cell density (hence 'a quorum') of themselves.  Algae have evolved ways to limit bacterial colonization of their surface.  In this regard, we have shown that V-BrPO is active on the surface of some marine algae (Image Gallery Figure 3), and can halogenate certain homoserine lactone (HSL) compounds (namely, 3-oxo acyl HSLs) which bacteria secrete for quorum sensing purposes; the brominated HSL prevents quorum sensing.  We have also shown that V-BrPO can catalyze formation of bromofuranone natural products, which certain algae (e.g., Delisea pulchra) use to disrupt quorum sensing in bacteria attempting to colonize the algal surface (Image Gallery Figure 4).   The extent of V-HPO involvement in other antimicrobial and bioprotective processes continues to direct our investigations.

Cryptic Halogenation Reactions.  In a new focus, we are interested in enzyme reactions that proceed through a halogenated intermediate, yet do not result in a halogenated product, that is, so-called cryptic halogenation reactions. Haloperoxidases play a key role, particularly in cross coupling reactions and in membrane formation.

Discovering New Halogenating Enzymes.  We are focusing on the discovery of new halogenating enzymes, facilitated particularly through genomics approaches, coupled with screening assays.  Colorimetric assays based on the halogenation of phenol red or other colorimetric substrates work well in the field (Image Gallery Figure 5).  Vanadium haloperoxidases are particularly stable and robust enzymes, holding up in high temperatures, significant concentrations of organic solvents, as well as in highly oxidizing environments.

My research interests are in bioinorganic chemistry and metallobiochemistry with an emphasis on elucidating roles of metal ions in catalysis by metalloenzymes, as well as processes by which microbes acquire metal ions they need to grow. We are currently focusing on the biosynthesis of siderophores in regards to microbial iron acquisition, with a focus on chirality in biosynthesis and chirality of the Fe(III)-siderophores; the role of haloperoxidases in disruption of microbial quorum sensing, as well as in cryptic halogenation reactions; the design of catechol compounds for wet adhesion; and the role of microbial peroxidases in lignin disassembly. 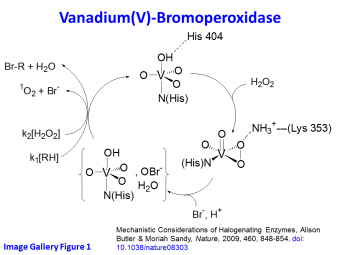 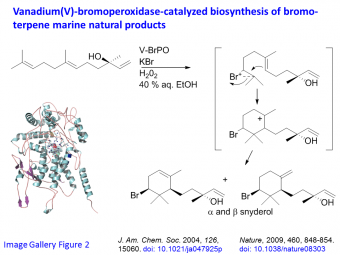 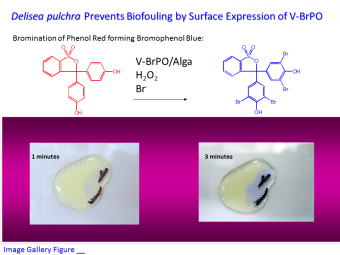 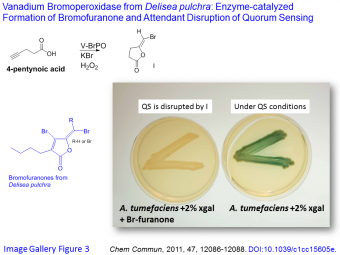 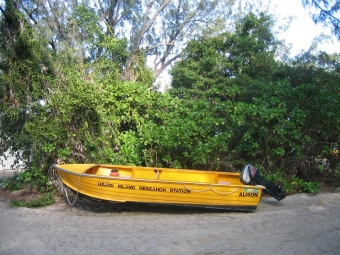 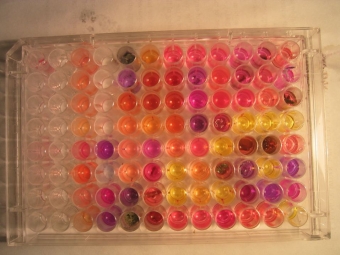