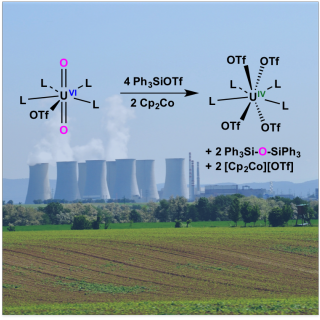 We are developing new methods for substituting the oxo ligands in the extremely stable uranium fragment, uranyl (UO22+). Modification of uranyl is relevant to the treatment of nuclear waste and provides insight into the interaction of bacteria with the actinides. It also represents an opportunity to uncover novel metal-oxo reactivity with potential applications in catalysis. Recently, we have found that oxo ligand silylation can be achieved with Ph3SiOTf. The silylation of the oxo ligand allows for a subsequent oxo substitution step. The two-step protocol represents a very rare example of controlled uranyl oxo ligand substitution. Building on these initial results, we are developing procedures for the catalytic silylation of uranyl at ambient pressure and temperature. Ultimately, by studying the structure and properties of these complexes we hope to develop new methods for decontamination and waste treatment.

Our research involves the synthesis and characterization of new inorganic and organometallic complexes and materials. One goal of this work is to improve our understanding of the structure and bonding in transition metal, lanthanide, and actinide systems, as well as nanoclusters. We are also trying to discover new organic transformations mediated by metal centers.

Gregg is currently working on the trans/cis isomerization of the uranyl ion, as well as the synthesis of novel actinide complexes for the understanding of 5f orbital covalency.

Ivan is working on the synthesis and characterization of complexes containing uranium-carbon double bonds.

Mikiyas’ research is focused on synthesis and characterization of new lanthanide and actinide coordination complexes.

Riley is working on the synthesis and characterization of new uranyl complexes containing macrocyclic ligands.

Neusha is exploring the viability of polydentate macrocyclic ligands for the stabilization of tetravalent lanthanide ions in organic media.

Ellie is currently studying the functionalization and reduction of the trans-uranyl moiety, (UO2)2+, which is the major form of the uranium found in spent nuclear fuel. She is also attempting to synthesize a cis-uranyl complex, in an effort to better understand the nature of the U-O bonds in this moiety.

Bonny is working on the synthesis of cis-uranyl complexes under the guidance of Gregg Kent.

Jonathan is exploring the ligation of macrocyclic ligands to the uranyl ion, in an effort to effect a trans/cis isomerization.

Megan is working on the synthesis and characterization of new uranyl complexes containing macrocyclic ligands.