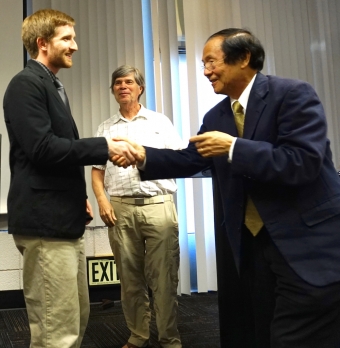 Jeff Carmichael was surprised and informed in the Butler Research Group meeting on April 1st (and this was not an April Fools joke) that he was selected as a winner of the 2016 UCSB Academic Senate Outstanding Teaching Assistant Award.  Professor Stan Awaramik came to our group meeting to make the announcement.  Jeff was subsequently honored by Chancellor Henry Yang, the Chair of the UCSB Academic Senate Kum Kum Bhavani and the Chair of the Awards  Selection Committee, Tom Dickey during the UCSB Faculty Legislature meeting later in April  (see the photos).  Congratulations Jeff!